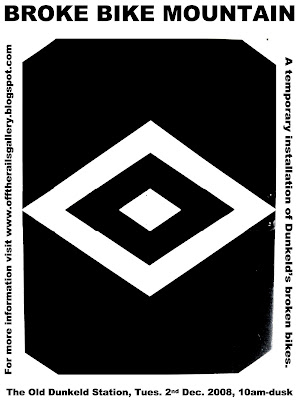 This exhibition features a series of new works by Dunkeld Artist Trevor Flinn.

Coinciding with the Great Victorian Bikeride, which passes through Dunkeld on Tuesday the 2nd of December, the centrepiece of this exhibition is a large installation work made up of over 30 broken bicycles.

Other works include various sculptures inspired by modernist masters.

The exhibition can be viewed on weekends throughout December (12 noon - 4pm).
Or by appointment by emailing trevor.flinn@bigpond.com
Posted by OTR Gallery at 2:16 AM 1 comment: 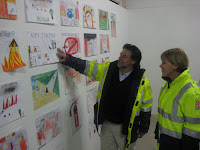 Dunkeld residents had an opportunity over the weekend to attend a special exhibition at Off the Rails Gallery of fire safety posters produced by local school children. The fire poster competition, which has been run in the Dunkeld Brigade for the past 25 years, promotes fire safety and was organised by Dunkeld brigade communications officer Helena Flinn, Dunkeld/Glenthompson Art teacher Lee Fisher and local artist Trevor Flinn.
Local children were asked to respond to one of three fire safety messages: Stop, Drop and Roll, Have a Fire Plan or Get out early or stay and fight. The children who best articulated the fire safety message were awarded a book prize, donated by the Dunkeld Brigade and presented, on Friday afternoon, by CFA Operations Officer Bruce Farquharson. Winners included William Cooper (Grade Prep.), Ben Cullinane (Grade 1), Calvin Ross (Grade 2), Amy Crawford (Grade 3), Georgia Gilbert (Grade 4), Sarah Hayes (Grade 5) and Sophie Gilbert (Grade 6).
Later the same day Fire Ready Victoria presenters Jenni Neaves and Lyall Grey visited the school to run a public information session about bushfire survival. The pair spoke about the importance of preparing early and having the right protective gear. They pointed out the advantages of using a mop and bucket to put out spot fires and how important it was to protect against the dangers of radiant heat.
After the session the pair visited the poster exhibition at Off the Rails and were impressed by the quality of the entries. “It would be great to see these posters reproduced in the local newsletter,” said Jenni Neaves.“It’s a great way to spread the message, and would give the kids a real kick to see their work in print.”
Posted by OTR Gallery at 10:19 PM No comments: 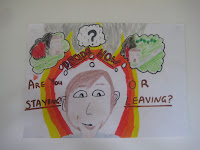 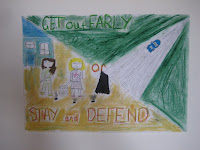 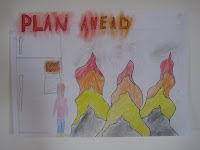 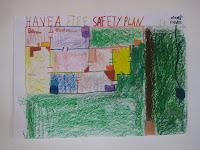 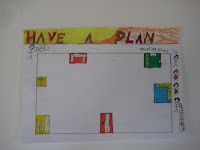 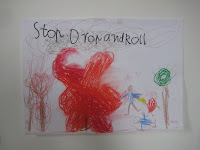 Fire Posters @ Off the Rails 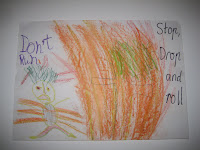